Before Shopping for a Wireless Charger

Most modern phones charge wirelessly at speeds between 5 and 10 watts. This means that to take full advantage of your phone’s wireless charging capabilities, you should buy a wireless charger that operates at 10 watts or more. In fact, a 15-watt wireless charger may be your best bet, as new devices like the Pixel 4, the Galaxy S10 and S20,  and the LG V30 have already crossed the 10-watt threshold.

There are still some other points to keep in mind while shopping for a wireless charger. While these aren’t as important as raw charging speed, they may affect what product you buy:

Now that you have an idea of what you’re looking at, it’s time to start shopping for a wireless charger. We’re going to cover everything from proprietary charging stands to universally mountable car chargers, so be sure check out every option before spending any money. CHOETECH’s 15-watt wireless charging stand is the real deal. It’s incredibly fast, yet it’s somehow the least expensive wireless charger in this roundup. Its two-coil design guarantees that your phone will charge properly at any angle and its vertical form-factor make it easy to watch movies while charging your phone.

Just know that this stand doesn’t contain Samsung’s proprietary wireless charging technology. This is only an issue if you own a Galaxy S10 or S20 device, which charge at 15 watts on Samsung wireless chargers. (For what its worth, these phones charge at 10 watts on the CHOETECH stand.) 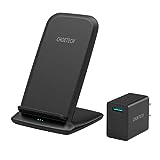 Another Favorite: The Nomad Base Station The Nomad Base Station Stand is the Cadillac of wireless chargers. It’s made with a leather dual-coil charging pad for portrait or landscape orientations, and it supports 10-watt charging through a USB-C cable. In our experience, the Base Station Stand outclasses the competition with its fantastic design, and it maintains a strong connection on even the rockiest of surfaces.

But Nomad doesn’t just sell charging stands. The company’s premium Nomad Base Station Hub makes for a wonderful dual-device charging mat, and has a USB-A and 18-watt USB-C output for powering additional devices. Nomad even sells the Base Station Hub with an Apple Watch stand, so you can charge your iPhone, AirPods, and Apple Watch all in one place. As we mentioned earlier, Samsung Galaxy S10 and S20 phones (along with their Note 10 and 20 counterparts) charge wirelessly at 15 watts, but only when they’re paired with Samsung’s proprietary 15-watt wireless charger.

This is among the best wireless chargers on the market. It has a built-in fan, a two-coil design for multiple viewing angles, and an attractive build to boot. But it’s also the most expensive wireless charger on this list. For this reason, we only suggest buying Samsung’s 15-watt charger if you own an S10 or S20 device. 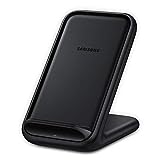 Any wireless charger on this list will work perfectly for iPhone owners, as the iPhone 11 charges wirelessly at just 7.5 watts. But if you’re a hardcore Apple fan with a mess of accessories, then MQOUNY’s wireless charging stand may be the best option for you. It operates at 7.5 watts and has a built-in magnetic charger for the Apple Watch. As with any wireless charger, the MQOUNY also works with AirPods and other wirelessly charging earbuds.

As a side note, Logitech sells a 3-in-1 charging stand that’s made specifically for the iPhone, Apple Watch, and AirPods. It’s an expensive option, but it’s more robust than the MQOUNY charging stand and $20 cheaper than the 3-in-1 Nomad Base Station. CHOETECH’s dual-charging mat sells for nearly $40. That’s a decent price for any charging mat—especially one with 10-watt simultaneous charging. Still, it’s worth mentioning that a pair of CHOETECH 15-watt charging stands costs just a few dollars more than this mat, and may stand as a comfortable alternative. 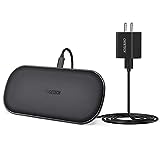 For Popsockets: The PopPower Wireless Charger Now, we’re getting into some weird territory. PopSockets, the round phone grips that stick to the back of your device, are notorious for obstructing wireless chargers. As of right now, the only solution is to buy a PopPower wireless charger—an ingenious device with a cutout that fits PopSockets.

The PopPower isn’t cheap at all. But it’s the only wireless charger that’ll work for PopSocket users, and it reaches commendable 15-watt speeds. It also works for phones that do not have a PopSocket or accessories like AirPods.

We had a chance to use the PopPower earlier this year, and subsequently crowned it The Best Mobile Accessory at CES 2020. It’s a simple yet innovative product, and we hope to see more PopSocket accessories in the future. Using a wireless charger in the car is like a dream. You don’t have to worry about plugging in your phone, you just set it and forget it. But it’s difficult to find a fast wireless charger that fits into every car, so we’re going to focus on a universally compatible option from ZeeHoo.

ZeeHoo’s car charger charges at a maximum of 10 watts, has an adjustable phone clamp, and can rotate into horizontal or vertical orientations. It’s packaged with an air vent mount and a pivoting suction cup mount that’ll work well on nearly any surface of your vehicle.

The ZeeHoo’s only fault is that it isn’t sold with a power adapter (but it does come with a proper USB-C cable). If you buy this mount, be sure to grab a cigarette lighter to USB-C PD adapter. 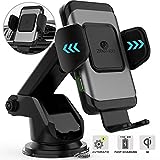