Microsoft is shutting down Wunderlist on May 6, 2020. If you’re still using this once-popular task management application, it’s time to switch. Microsoft purchased Wunderlist, and the Wunderlist team is now working on Microsoft To Do. But that’s not your only option.

You Have Until June 30 to Import Tasks

While Wunderlist is shutting down on May 6, 2020, Microsoft says it will continue letting people import data from Wunderlist to Microsoft To Do for a while longer.

A blog post from Wunderlist originally said the migration feature will only be available “for a period of time” after the shutdown of Wunderlist. Now, it looks like you have until June 30, 2020, to import your data. After that time, it will likely be deleted from Wunderlist’s servers.

How to Migrate Tasks to Microsoft To Do

The process of switching and importing your to-do lists from Wunderlist to Microsoft To Do is pretty simple.

First, head to the Microsoft To Do website. Ensure you’re signed in with the Microsoft account you want to import your Wunderlist tasks to.

Next, Microsoft To Do will show you what it’s importing. If everything looks right, click “Import” to continue. 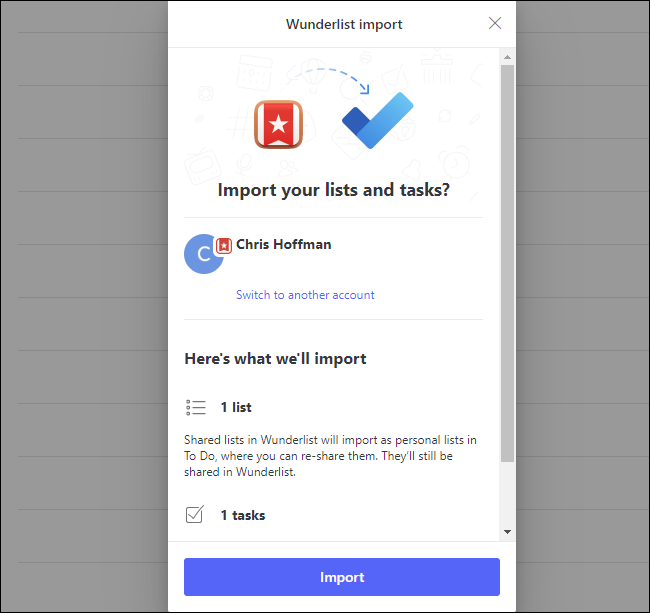 If you click the gear icon at the top-right corner again and click “Import Summary,” you’ll see more information about how the import was handled.

Alternatives to Microsoft To Do

If you love Wunderlist, Microsoft To Do is probably the closest alternative—after all, it’s made by the same team.

However, it’s not your only option. Our sister site Review Geek has run down the best replacements for Wunderlist, including Todoist, Any.do, Google Keep, Habitica, and Remember the Milk.

If you’re into Apple’s ecosystem services, the Reminders app for iPhone, iPad, and Mac is an easy-to-use alternative that syncs via iCloud.

If you prefer Google services, you can also try the new Google Tasks application, available in Gmail, Google Calendar, and in the Google Tasks app for iPhone, iPad, and Android.

Some services—like Todoist—can import from Wunderlist. However, you’ll likely need to perform the import process before Wunderlist shuts down on May 6. It’s time to switch.

RELATED: Wunderlist is Being Shut Down in May 2020—Here are 6 Great Alternatives